I bought an Olight S10R Baton II a month ago and has been working perfectly up until this week. It will only work on it’s lowest setting and when I switch it to anything higher it does this and there is an audible buzz coming from the body. Is it dead? Does anyone have any experience with Olight and their warranties? ** Partial update

The Olight S10R Baton II is the second iteration of the popular S10R, of the rechargeable series, of which the S10 is the non-rechargeable version. The reason for its popularity? At only 2.89 inches, it disappears into the palm of your hands should you wrap your fingers around it, making it the ultimate EDC (Every Day Carry) flashlight. Don’t be fooled by it’s size because it packs a truckload

View a manual of the Olight S10R BATON II below. All manuals on ManualsCat.com can be viewed completely free of charge. By using the ‘Select a language’ button, you can choose the language of the manual you want to view.

Olight S10R II Baton LED Flashlight is an illumination device that has reliable performance that lights up even the darkest surroundings. Olight has been committed to providing high-quality products for everyone’s illumination needs. Released as the 2nd generation of the S10R, the Olight S10R II comes in a rechargeable design and the most recent Cree XP-L LED technology that enables the

Jul 06, 2017 · Thanks to Foong of Mount Xplorer Outdoor Gear, received a S10R III Baton and a S30R III Baton for testing and review. The release of this 2 flashlights seems like an act to fulfill a promise of Olight to release an updated version of S10R II and S30R II.

Oct 30, 2018 · Olight S10R Baton III Value . For roughly $60 you are getting the S10R Baton III Light, magnetic charging dock (USB powered), and a 650mAh Rechargeable RCR123A Battery. Based on my experience with this light so far, I would have no issues paying $60 for this setup (and then an extra $10-15 or so for some spare batteries). Who Would Love It?

The S30R Baton III (S30R III in short) is the third generation of our flagship S30R flashlight series. This flashlight includes our signature Olight blue accents with the latest Cree XM-L2 LED that covers an output range from 0.5~1,050 lumens.

The S30R Baton III (S30R III in short) is the third generation of our flagship S30R flashlight series. This flashlight includes our signature Olight blue accents with the latest Cree XM-L2 LED that covers an output range from 0.5~1,050 lumens. 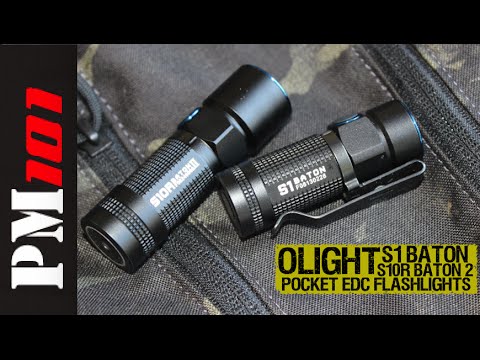